The disadvantages of being an early adopter 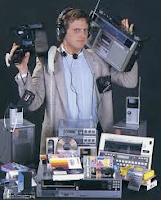 Are you an 'early adopter' or are you just a follower like the rest of us? To answer this question let's first find out what this definition means. Is it just another Online Marketing definition that's buzzing all over the Internet, or does it truly add value to the description of a person?

To my surprise the definition is an old one. It originates from Everett M. Rogers' Diffusion of Innovations, which he wrote in 1962! So, it's truly old!

Wikipedia states that 'An early adopter or lighthouse customer is an early customer of a given company, product, or technology, in politics, fashion, art, and other fields such as Online Marketing. This person would be referred to as a trendsetter. So why not call it trendsetter I hear you wonder? Apparently, there is some difference, a very significant one!


Typically an early adopter is a customer who, in addition to using the vendor's product or technology, will also provide considerable and candid feedback to help the vendor refine its future product releases, as well as the associated means of distribution, service, and support.
The relationship is synergistic (see content syndication), with the customer having early (and sometimes unique, or at least uniquely early) access to an advantageous new product or technology, but he also serves as a kind of guinea pig.


What's in it for you?
In exchange for being an early adopter, and thus being exposed to the problems, risks, and annoyances common to early-stage product testing and deployment, the lighthouse customer is sometimes given especially attentive vendor assistance and support, even to the point of having personnel at the customer's work site to assist with implementation. The customer is sometimes given preferential pricing, terms, and conditions, although new technology is very often expensive, so the early adopter still pays often quite a lot.
What's in it for vendors?
The vendor, on the other hand, benefits from receiving early revenues, and also from a lighthouse customer's endorsement and assistance in further developing the product and its go-to-market mechanisms. Acquiring lighthouse customers is a common step in new product development and implementation. The real-world focus that this type of relationship can bring to a vendor can be extremely valuable.
Brace yourself for bugs
Early adoption does come with pitfalls: early versions of products may be buggy and/or prone to malfunction (such as the Commodore 64 or Xbox 360) or prematurely obsolete (8 track tapes, Betamax, HD DVD). Furthermore, more efficient, and sometimes less expensive, versions of the product usually appear a few months after the initial release (exploding Apple iPhones). It's these bugs that cause the very disadvantage of being an early adopter. But there are more to come....
Brace yourself some more bugs
Being an early adopter does not only mean that you have to face bugged products such as inconsistent editors in Blogger, iPad2 idiotic characteristics that it don't allow Flash or a lot of Apps, and DOES let other Apple Apps crash. It also makes you want to throw your latest digital gadget or tool through the window. This will relief some stress momentarily...until you get the bill for your new windowpanes... You might want to reconsider throwing about stuff because it doesn't work or does not what it promises, which brings me to another disadvantage: the promise of a working digital gadget or online service.
Than all hell broke loose...
One of the most frustrating realities of early adopters is paid services that aren't delivered or are delivered in a way you don't want. My newspaper for instance had a great offer that went with a special iPad action. Since I consider myself to be somewhat of an early adopter, I subscribed immediately. It meant getting an iPad2 with a discount of 150 Euro AND a daily readable digital versions of the newspaper. Then all hell broke loose... No one told me that the App to that very digital version would stop working one day. Today to be specific.... Even worse, no one told me I would get the paper version as an encore, next to the digital one. Isn't the point of having a digital newspaper that you don't need a paper one anymore? The newspaper's Hell desk told me it was impossible to NOT receive the paper version. In other words, dear client you HAVE TO receive our paper wasting unnecessary newspaper in order to get the digital one. It got worse...
I tried not to scream...
After accepting that all of the above were the risks I ran as an early adopter, I called back the newspaper's Customer Scare to ask if I could have the unnecessary paper version of the newspaper delivered to a nearby home for the elderly. Customer Scare's reply: certainly but only for three months, after that you have to pay delivery cost... I was flabbergasted! Not only did I end up with a gadget that doesn't work properly, I also have to pay, to make someone else happy with a newspaper I don't use. Wasn't the whole idea of (Internet) communication 2.0 sharing, syndicating....
Early SUCKER
So now I feel like an early sucker. Someone who fell into the trap of being too eager to get first in line, to adopt a new trend of reading newspapers in full format online. My point: be very careful before you spend money on novel gadgets and eservices. Be very cautious in being an early adopter... it might all backfire and leave you with nothing else but bills, tools, holes in your windows, and contracts you didn't sign up for....
Posted by rhkMARCOMonline at 03:21