In an older post I elaborated on female influencers: women who are active on the Internet and in mobile networks. Specific target groups such as these tend to be ignored bye Online Marketers. Big mistake!  The impact of female influencers on the web is huge. Today, Emarketer published an article about ‘older moms and smartphones’. 45% of 45+ moms use smartphones to locate nearest stores. And over 90% of younger and older women use smartphones for games and entertainment. Younger, middle aged and older moms are definitely not to be overlooked female influencers! Even if all this refers to the US market, I expect European markets such as the UK and Dutch one to follow in its wake.
As smartphones spread to older moms, where does usage stand?

Smartphones are spreading quickly throughout the population. eMarketer estimates 31% of US mobile users will have a smartphone this year, and according to research from mobile ad network Greystripe, many of those phones are ending up in the hands of older users. The company’s “Advertiser Insights Report” on moms who use smartphones found that in Q3 2009, just 8% of the group were ages 55 or older. By Q1 2011, 26% were in that age group, while the proportion of the smartphone mom population under age 45 had dropped correspondingly.
Mobile shopping
Younger moms and older moms had similar levels of participation across several smartphone shopping activities, according to the survey. Moms under age 45 were about equally as likely as moms ages 45 and older to use their phones to locate nearby stores, compare prices and make shopping lists.
But younger moms were ahead when it came to more advanced mobile shopping activities, like researching new products, downloading digital coupons, tracking sales and making purchases on their phones. Respondents under 45 years old were also less likely to say they didn’t do any mobile shopping activities. 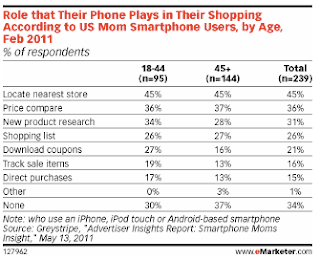 Younger moms were also more apt to download mobile applications in a variety of categories, though older moms were even or ahead in areas like news and health and fitness apps. 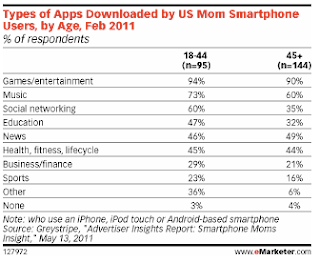 '
The survey did not break out a category for shopping-related apps, but many are seeing high usage and opening up new possibilities for retailers to reach on-the-go customers. shopkick, for example, which released version 2.0 of its namesake app in May 2011, now allows shoppers to “favorite” stores, creating a personalized tab of relevant deals. The app reported that within five days it had logged over 1 million “faves.”
Posted by rhkMARCOMonline at 09:49