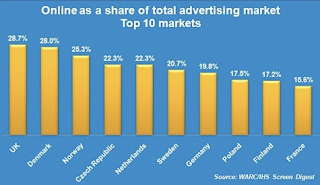 Neal Mohan, Google’s Vice President of Display Advertising, predicts a brilliant future for display advertising. By 2015 engagement, co-creation and über-personalized display ads will cause growth in the display advertising market.
I believe all that. I seriously doubt, though, that 40% of online (US) users will name display advertising as their favourite advertising format. This was the outcome of a survey done among 1000 US Internet users.
21.3% growth
My doubts, however, seem to be out of place. The Internet Advertising Bureau Europe (iabeurope) also mentions a ‘bounce back’ of Display Advertising throughout Europe (including Russia) with an average growth rate of 21.3%, Display overtaking Search advertising as the fastest growing online ad format in Europe.
Display and Search ads
The outcome of IAB Europe’s annual AdEx survey is fascinating. It shows the online advertising market accelerating at a growth rate of 15.3% in 2010 - outperforming the overall European advertising markets, which grew 5.0% in the same period. Total online adspend was €17.7bn in 2010, compared to €15.3bn in 2009.

Market growth ranged from:
37% in Russia;
24% in the Czech Republic;
14% in Denmark;
7% in France.
The markets with the highest online adspend in the report are:
UK
Germany
France
Netherlands
Italy
Spain
Together they account for almost three quarters (74%) of the total European online advertising market. Central and Eastern Europe (CEE) markets now represent almost a tenth (9.8%) of the total.
Russia, Ireland, Spain
Display* advertising enjoyed growth rates of 20% or more in many markets - both emerging and mature - during 2010.  Above average growth rates were experienced in Ireland (31%), Spain (30%) and Russia (27%).
Rich Media
The continued growth of online TV inventory, and long-form video consumption, pushed up spend while simultaneously maintaining high CPM (cost per thousand). Online video adspend has doubled in most markets. In Spain online video grew 125% to a value of €13m; growth in the UK was 90%, to a market value of €63m.
Super Search
Paid search continued to grow double-digit at an average of 15.1%. It remains the biggest category in online advertising, with 45% of total advertising spend compared with 33% for Display and 22% for Classifieds and Directories. Whilst some of the more established markets experienced smaller increases (UK +8%, France +10%) many saw explosive growth (Hungary +44%, Poland +31%).
Mobile Advertising
Mobile search and mobile display are included in the AdEx survey for the first time this year. I presume that is in 2010. Although mobile adspend figures are available for only 12 of the 25 markets, they confirm that the long-awaited take-off of mobile advertising has been realised thanks to the advent of the smartphone/3G/apps ecosystem. In those markets, mobile adspend already accounts for 2% to 3% of total online adspend.
17 Billion Eures!
With €17.7bn of adspend last year, online now accounts for 18% of the entire European advertising market. It is now beyond 20% in some markets (UK 29%, Denmark 28%) whilst it’s only 5% in Greece and 4% in Romania. European market value is smaller than the US which also experienced a 15% growth rate last year and is now worth $26bn/€19.6bn.
2009: flat Display market
According to Vincent Létang, Senior Analyst at IHS Screen Digest says “Back in 2009, video was the only growth engine in an otherwise flat Display market. In 2010 by contrast, three pillars: mobile, video, social media, attracted new advertising investment.
Display advertising by 2015
Now, superimpose Mohan’s six predictions about how display advertising will change for the better by 2015 and imagine what will happen on the European market:
Sources: iabeurope.eu, technews.am
Posted by rhkMARCOMonline at 05:03