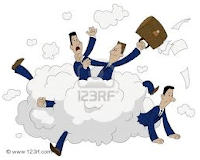 Haven't heard that one before. It triggered my imagination though. How do you Gamify something? Is it something you control, or does it overwhelm you? Wikipedia gave an interesting description of the word Gamification. One that can be very practicle when developing online marketing strategies. The part that fascinates me is, the fact that it tabs into the human desire to have fun. For instance, if you manage to make a boring task fun, wouldn't it stop to be boring? Most importantly, someone who starts enjoying a former boring task will perform better and be a happier individual in the end. Win-win situation I should say. Or is it? Will Gamification help compan to reach their targets faster because employees have more fun at doing their job? Or will people increasingly take nothing seriously anymore. I mean, when everything is a game, why be serious at all?
Gamification is:the use of game play mechanics [1] for non-game applications (also known as "funware"), [2] particularly consumer-oriented web and mobile sites, in order to encourage people to adopt the applications. It also strives to encourage users to engage in desired behaviors in connection with the applications. [3] Gamification works by making technology more engaging,[4] and by encouraging desired behaviors, taking advantage of humans' psychological predisposition to engage in gaming. [5] The technique can encourage people to perform chores that they ordinarily consider boring, such as completing surveys, shopping, or reading web sites.
Gamification or serious gaming is a proven method to teach people how to work a new application faster. In the 90ies I was involved in experiments (don't worry there were no side effects...) at the Technological Dutch Research Institute. Most of they experiments involved digital environments in which I had to perform certain tasks such as copying numbers lighting up on screen as fast as you could or driving a car along a route where you had to avoid crashing into obstacles. Without exception there was a game or competition element included in these experiments. I distinctly remember being a member of a team that was instructed to run a spaceship for 24 hours without sleep. Tasks were navigating the ship through meteor storms, and handling life support systems on the bridge. The institute’s goal of this experiment was measuring:
the time it took to learn a complicated task in a game like environment;
the impact of peer pressure when failing a task;
the impact of incentives such as better results means more goodies;
the impact of lack of sleep on doing your taks properly.

When results rose, the team got rewarded in the form of food and other games. When they dropped, certain restrictions befell us…A grim detail was the risk you ran of killing fellow astronauts because of wrong choices, dropping concentration, or nerves. Visible on large screens the entire team could follow your progress or the dismal situations created by you… Most subjects (all university students of different faculties) reacted the same when it came down to peer pressure and loss of concentration because of lack of sleep: dropping results.

Polarisation
A big difference between team members surfaced. After having finished our shifts, some of us triggered to air their strategic alternate ideas according to which better results were guaranteed. Even though parameters of the ‘game’ were fixed.  This creativity reached annoying levels causing members to perform worse. It actually created polarisation within our team. The overall performance got worse. Motivation dropped and obviously lack of sleep influenced social inhibitions as well as concentration. By the experiment no one could fly a ship or control life support systems without disastrous endings. I can still remember the alarm sounding, and see the level graphics dropping while people are suffocating because of my faulty actions.


Backfire
In the end this experiment showed that learning to perform tasks in a gaming environment could backfire enormously. Interestingly enough, after a week we, the divided team, received questionnaires about the experiment. All questions where about the tasks we had performed a week earlier.


Learning Curve
After two weeks the results were put out. All team members, even the ones who had crashed ships and killed astronauts the most, had a very high score of right answers. So regardless of poor performance due to unexpected developments in the group, our learning curve had been exceptionally high. But if this would have been a realistic working environment you would have ended up with a team of skilled workers who refuse to work together leaving you empty handed…
Posted by rhkMARCOMonline at 07:45