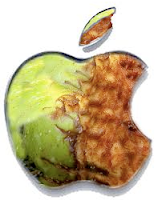 Apple's worth surpasses that of Microsoft AND Intel together. Brilliant, was my first reaction. My second thought was, let's assess Apple's current situation. They have grown enormously. Manage to increase sales, even in times of crisis due to excellent Marketing strategies. Apple became one of the most popular hardware brands of the last decade.
In Europe, it's not only hipsters anymore who drag along their MacBooks, iPhones and what not. It is businessmen and –women, kids, housewives, grandfathers, civil servants too. Somewhere along the line Apple became more mainstream. Does this matter? My first reaction would be NO! Their products perform much better than Microsoft/Intel hardware, they're stable, and at the same time look good as well.
Interestingly enough, Apple's iPad's may be the very trigger to a digital market based on tablet pc's. The succes of the iPad is huge, and if I say so myself, the iPad is FUN!

Cracks
My second thought, after all this praising is, worrisome. Cracks are appearing into the Apple brand. Cracks that break with the overall image of Apple being an 'open' brand. Cracks that are beginning to resemble Microsoft products. For instance, you miss out on a lot of apps because Apple refuses them on iPhones and iPads. It's only Apple apps you can use. I have heard rumours that the iPad accepts only eBooks in a certain format. Still have to look into that.
Hard time
Furthermore, iTunes gives you a hard time when you want to import mp3/4's from any other carrier than your iPhone or iPod. It turned out to be somewhat of an ordeal when I wanted to transfer all my music files from Limeware and Soulseek to iTunes on my MacBook. The iPad2 still is devoid of a usb slot, despite the buzz that it would have one.
Rotten fish
It's beginning to smell a bit fishy; fishy, the monopolising kind that is. I sincerely hope, that Apple turns around this development. Before it turns into just another Microsoft.
Posted by rhkMARCOMonline at 23:45