Despite growth, Twitter usage is still a niche activity… Strange! It made me wonder where the growth comes from? Obviously, not from new accounts since only 8% of consumers to use the service. Maybe it is because you cannot really do that much with Twitter. Compared to other Social Media like FaceBook, Twitter is volatile and is based on short acronym-like communication. Somehow, I get the feeling that Twitter is more about just posting a couple of brief remarks for the sole purpose of exposure...


With exposure I mean personal exposure. To show your followers what you are doing, where, how, and when. A form of digital exhibitionism to show off, get attention or basically express to the world and/or your followers that you're bored. (re. the average tweet is about trivial themes such as, 'un my way to shop...') Devoid of any form of real communication... a sad reality of people incapable of real contact...


On the other hand, Twitter can be a medium to share knowledge very fast. Be the first to notice a new online marketing development and share it with your friends and/or followers. A perfect medium to get a message across to alot of people in the fastest possible way. And messages do not have to be trivial. They can be purposeful, well-meant, or very informative. Personnaly, I follow some EU-politicians because they use Twitter to post news that I would otherwise read much later in traditional media.


Some say that Twitter will be THE search engine of the future... It is indeed very practicle as a search engine. You can look up writers, scientists, Social Media specialists, even follow Webinars!


All this, however, still doesn't explain why 'everyone' knows the platform, a relatively small group uses it, and meanwhile it is still growing????.. Below eMarketer article doesn't really explain it either.


The Pew Internet & American Life Project announced this month that Twitter usage had risen from 8% of US internet users in fall 2010 to 13% in May 2011, a 62.5% increase in penetration. Twitter usage does seem to be growing, but is a bump like that sizeable enough to take it from niche to mainstream?

In May, Arbitron and Edison Research published an update to their social media research indicating Twitter has a long way to go in convincing consumers they want to use the microblogging service.

Awareness of the service was high, at 92%, but just 8% of consumers ages 12 and up said they had ever used it. Although Twitter awareness actually increased 5 percentage points from an already high figure in 2010, usage increased by just 1 point over the same period. 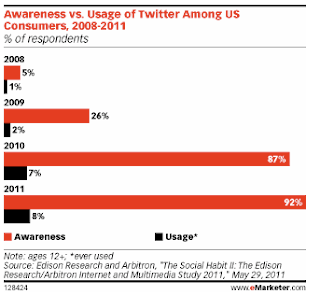 To be sure, Facebook has greater awareness than usage, too. Arbitron and Edison found that more people have heard of the social networking giant than use the internet in the US. But Facebook usage is also high, at an estimated 42.3% of consumers and 57.1% of internet uses this year, eMarketer believes.
By contrast, eMarketer estimates just 11% of internet users will access a Twitter account at least monthly this year. 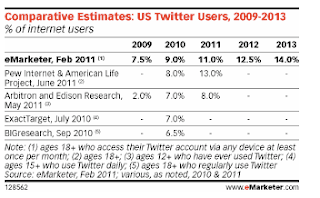 eMarketer projected in January 2011 that US advertising revenues on Twitter would reach $140 million this year and $225 million in 2012. That forecast depended, however, on traffic trends improving and the site seeing greater uptake. Pew’s research indicates that usage may not be flattening, but Twitter has thus far failed to make its value proposition appealing to most Americans who have heard of it.
Source: emarketer.com