Ever seen a QR-code in the pavement? 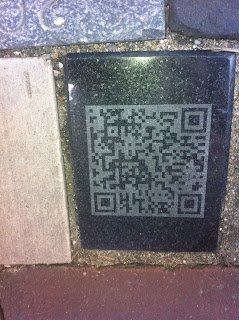 Dutch medieval city Utrecht, founded 50 A.D. by the romans,  goes 21st century!! Off late you can scan QR-codes that are engraved in the pavement of the Oudegracht in Utrecht! This brilliant combination of new technology and ancient use of stone is initiated by the 'Utrecht Guild of Poets' and Million Generations Organisation.


The actual stone engraving is done by traditional stonemason Gerrit Peele. Unlike most QR-codes in public space, this one - see image on the left - actually DOES provide you with intelligible content. After scanning the code with my iPhone, a homepage opens. This homepage describes the poetry project and provides you with content that invites you to read on, interact, buy, and experience the entire project.  It even provides content in rich media format.
I'd say this is one of the coolest uses of QR-codes in public space. It works, has relevant customer centric content and intersects new technology, old trades,  commerciality and cultural heritage. Other than Dutch real estate agencies, I cannot come up with better examples of the use of QR-codes in public space. BIG BIG LIKE!!!

The Letters of Utrecht

Explanation of the Letters of Utrecht (video, in Dutch)
A poem for the future grows in the stones of the street in the center of the town of Utrecht, The Netherlands. One character per stone, one stone per week. Every Saturday a stone mason turns the next stone into the next Letter. In months words appear. With the years verses grow in the streets, extended by a different poet of Utrechts’ guild of poets every few years. Through the centuries the line of the poem will itself draw letters on the map of the changing city.
Read more about 'De Letters van Utrecht'
Posted by rhkMARCOMonline at 08:26